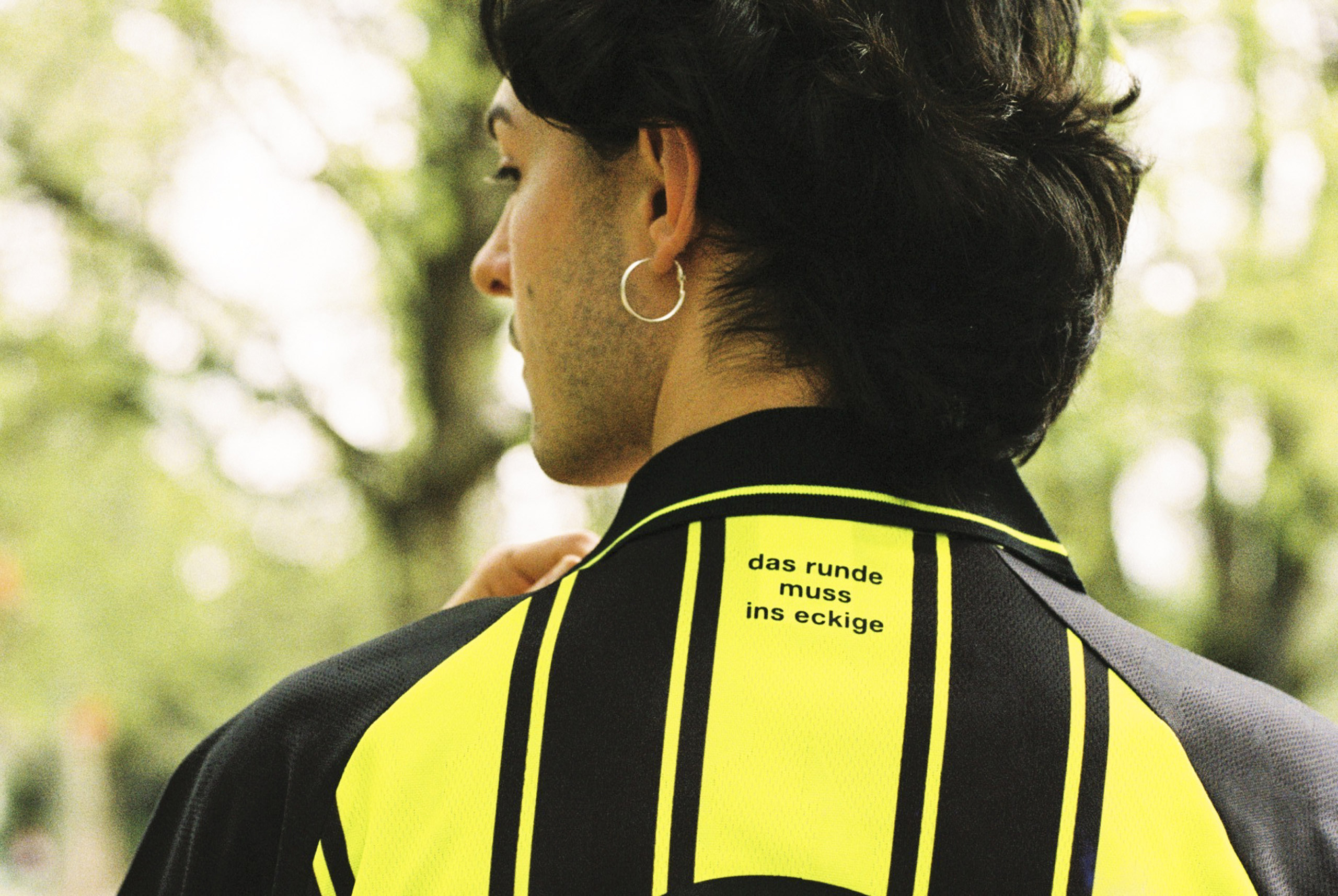 “Das Runde muss ins Eckige”, with these words Sepp Herberger, coach of West Germany, greeted his team’s victory against Hungary in the 1954 World Cup final. Literally “The round thing must go into the square thing”, the phrase clearly refers to the necessity of getting the ball inside the rectangle of the goal, but at the same time seems to evoke the relentless stubbornness of some children intent on fitting two impossible shapes into each other.

It is precisely this stubbornness that Parco Studio and Palazzi.club celebrate with this project. A capsule collection that becomes the symbol of the will to pursue one’s goals, even when they seem impossible to achieve. 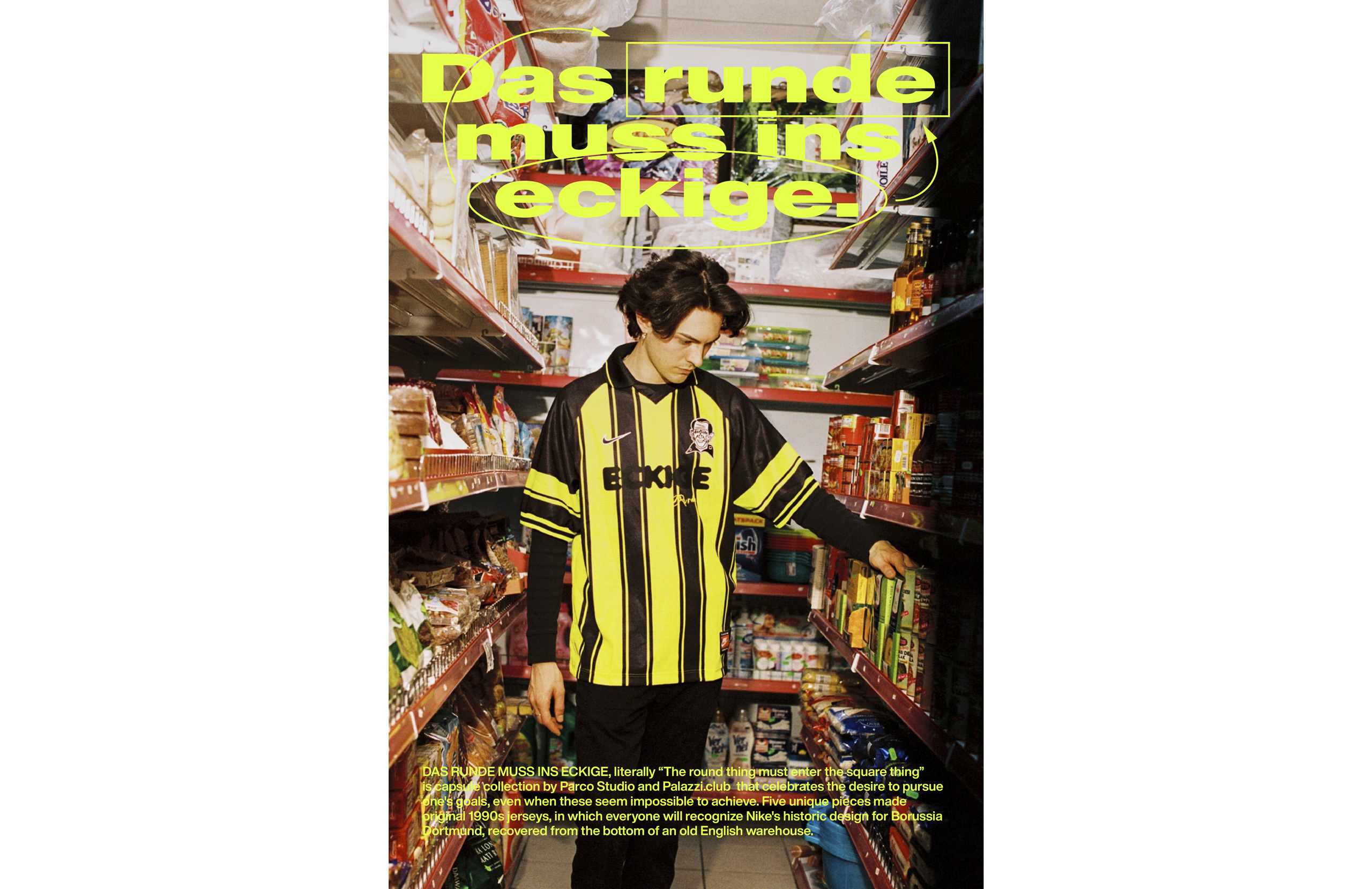 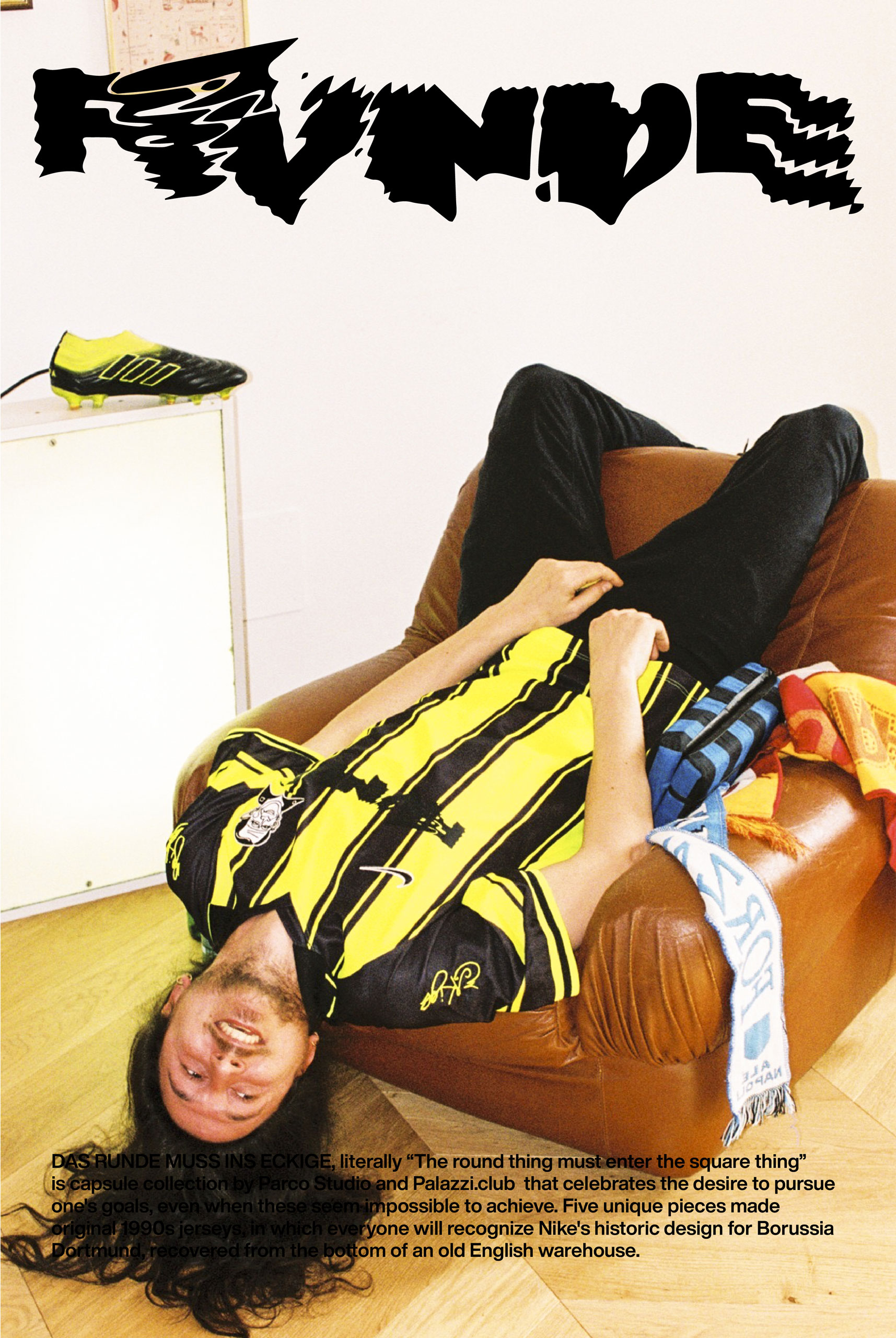 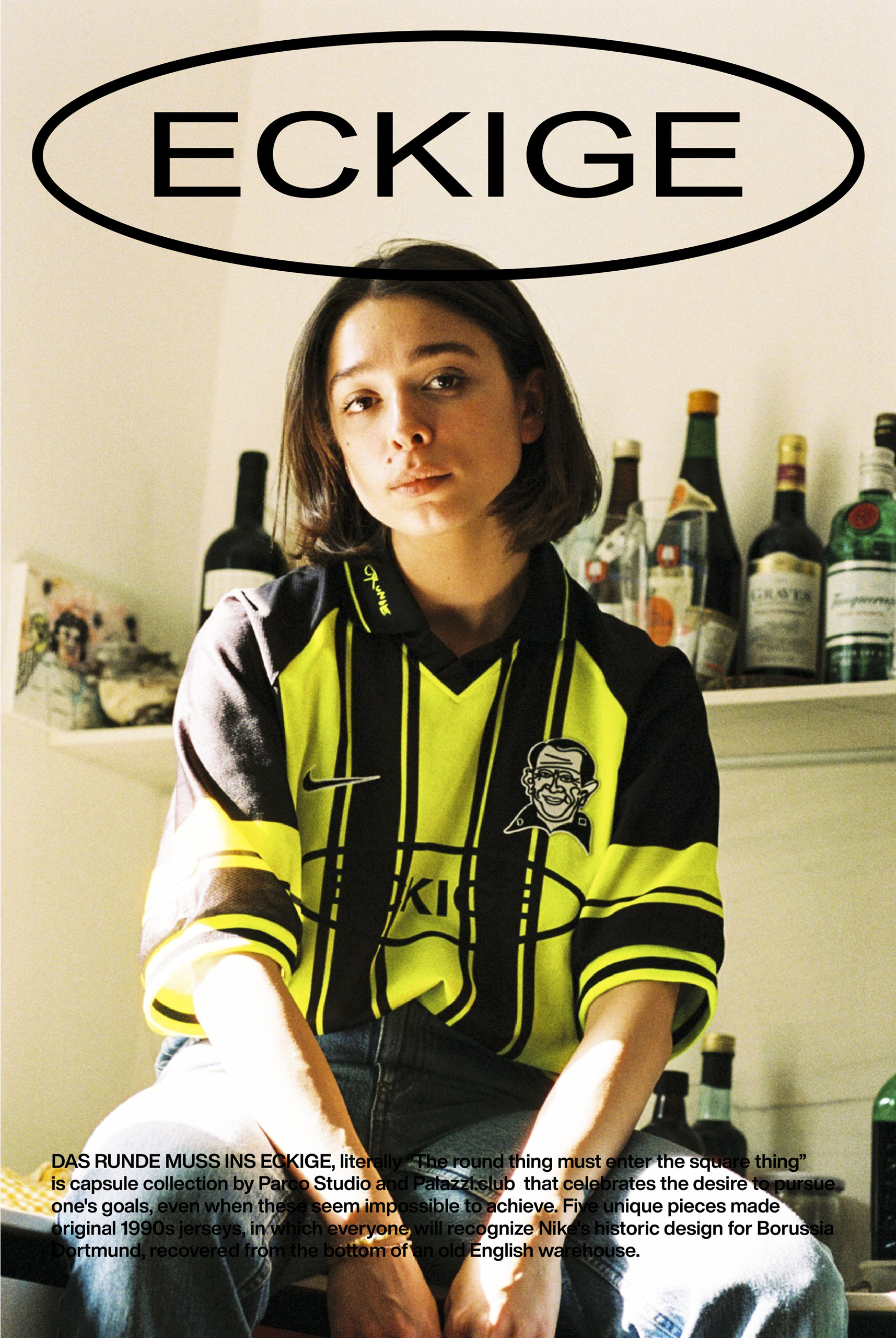 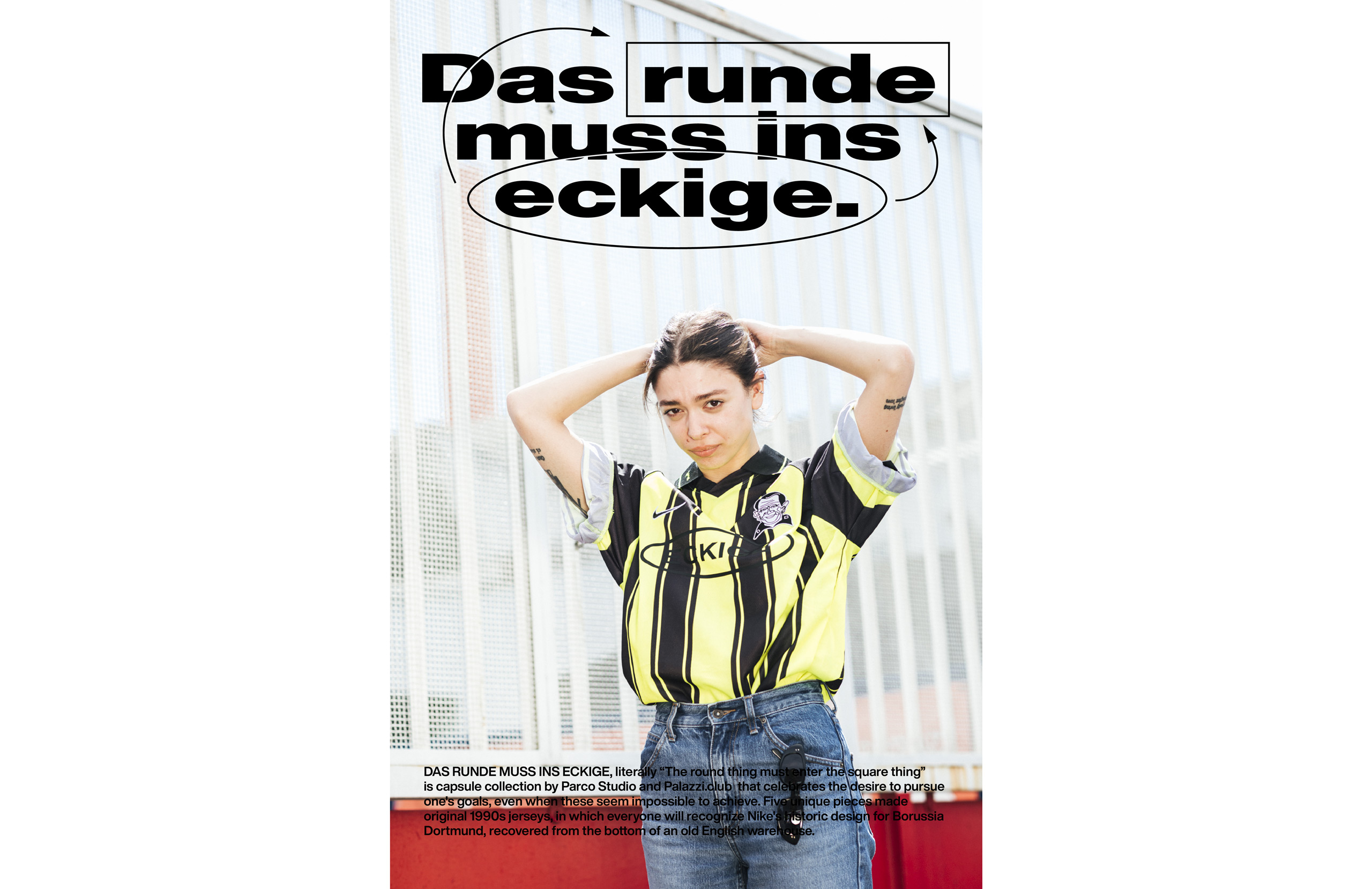 Five unique pieces made from the same number of original jerseys from the ’90 – on which everyone will recognise Nike’s historic design for Borussia Dortmund – salvaged from the bottom of an old English warehouse, still labeled, embroidered with Parco Studio’s graphics and Palazzi.club’s calligraphy and drawings. 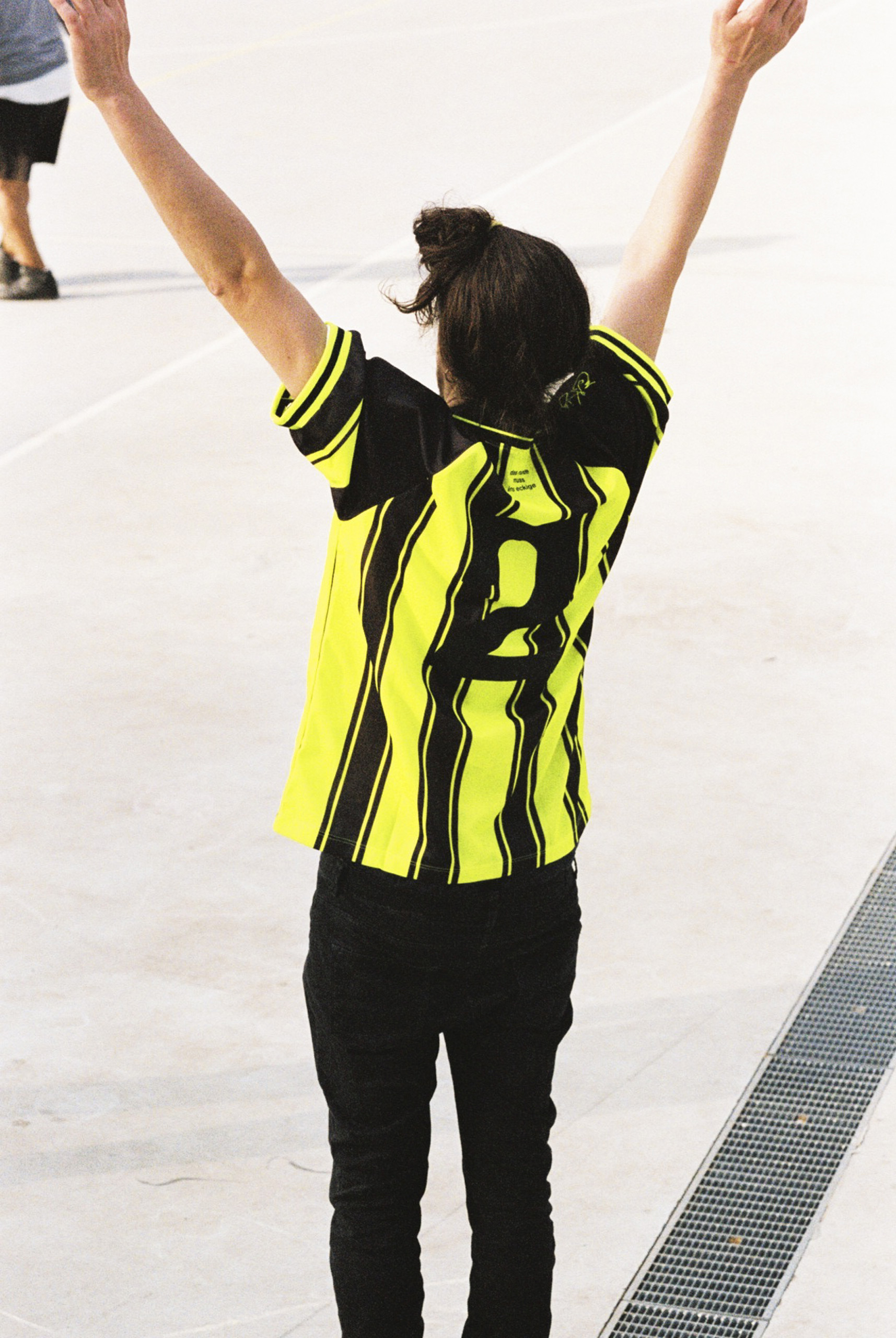 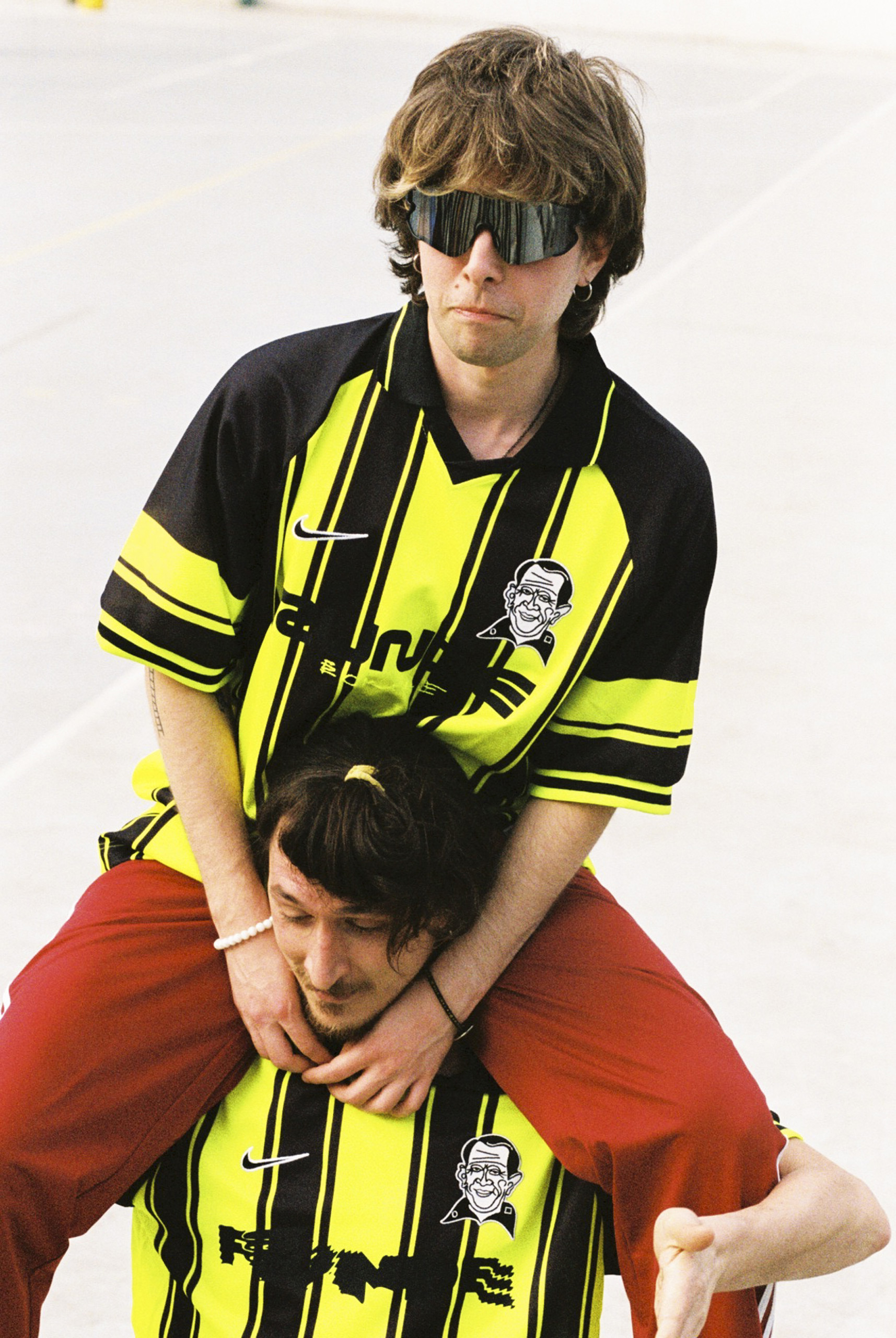 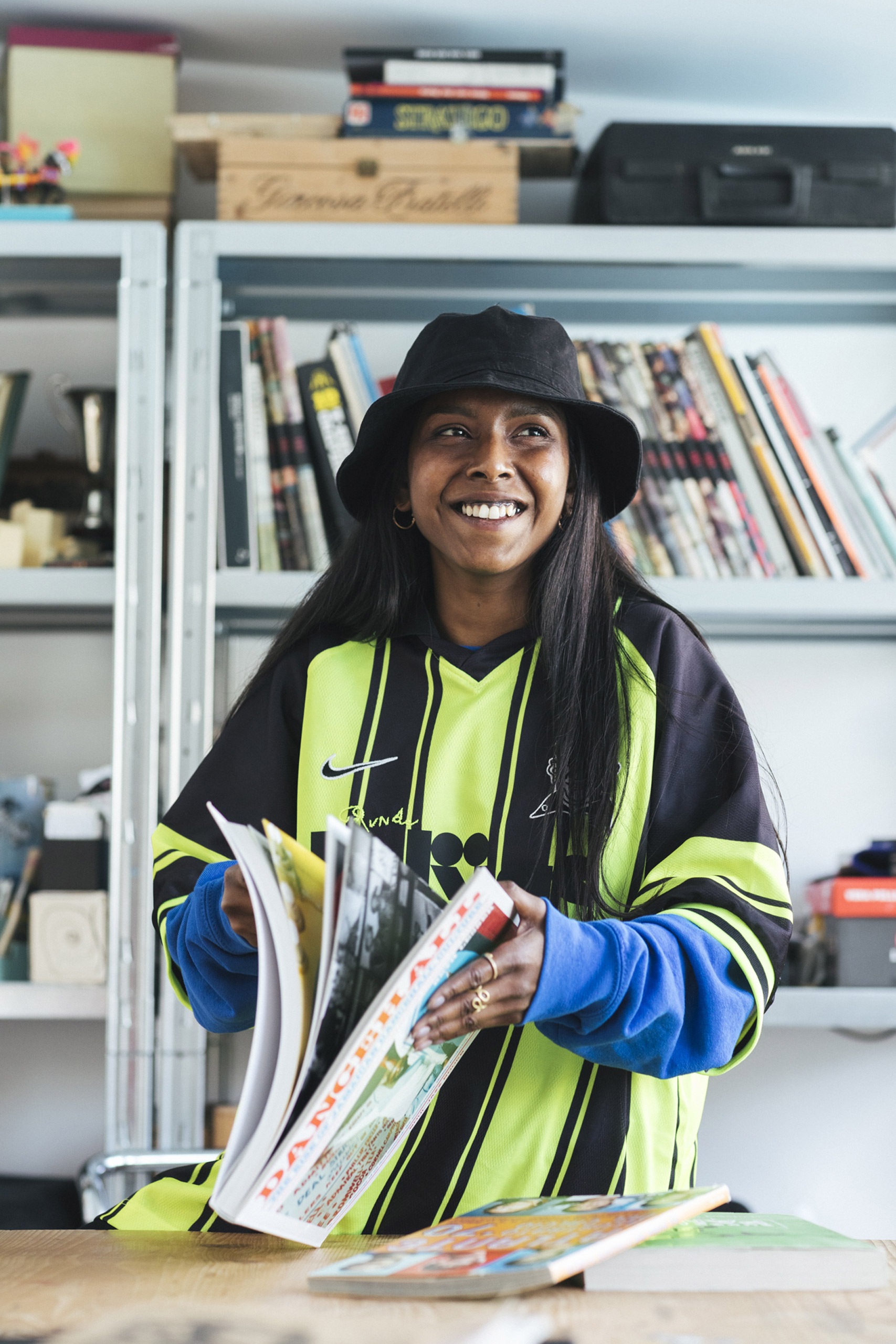 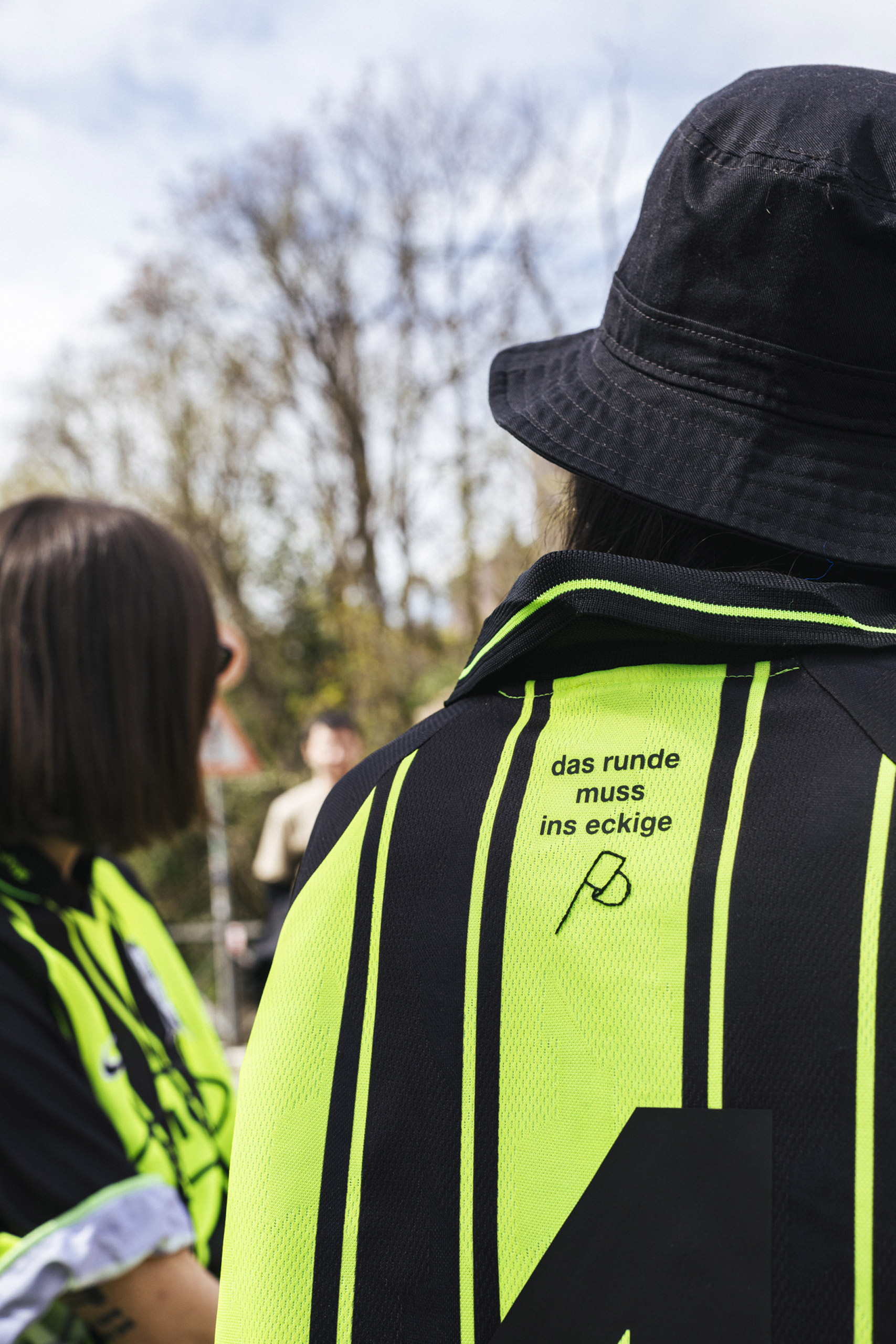 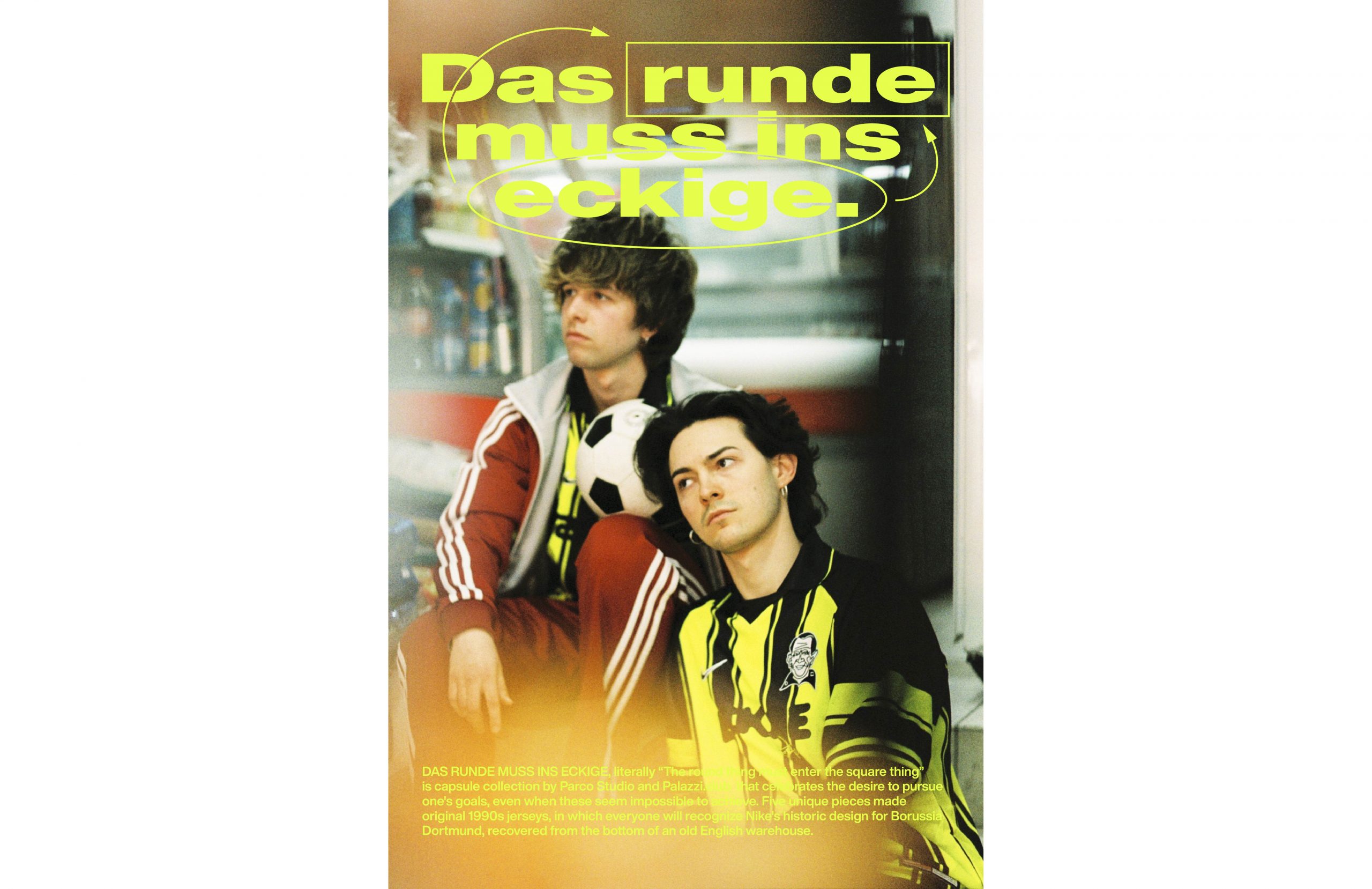 On the chest, in the position typically occupied by the main sponsor, various elaborations of the words “Runde” and “Eckige” alternate, represented with five inscriptions designed by the Milan studio, which also become a way of reflecting on the role that sponsors have had – and have – in defining the visual culture of a certain period. The words “Runde” and “Eckige” return in various places on the jerseys, together with small graphic symbols, designed by Palazzi.club and embroidered by Margherita Turchi in the same fluorescent yellow as the jersey. The yellow thread breaks up the stiffness of the vertical stripes and seems to recall the pulled threads of jerseys used for too long, to pay homage to an idea of a football jersey designed to be worn – and patched – endlessly, in the fields and squares of all the provinces of Italy rather than on the catwalk.

The numbers 1 to 5 heat-sealed on the back, as well as the sentence behind the collar complete the five shirts. Embroidered on the heart is the big face of the old Sepp, designed by Palazzi.club, winking and smiling, thanks to winning the world title as an underdog. 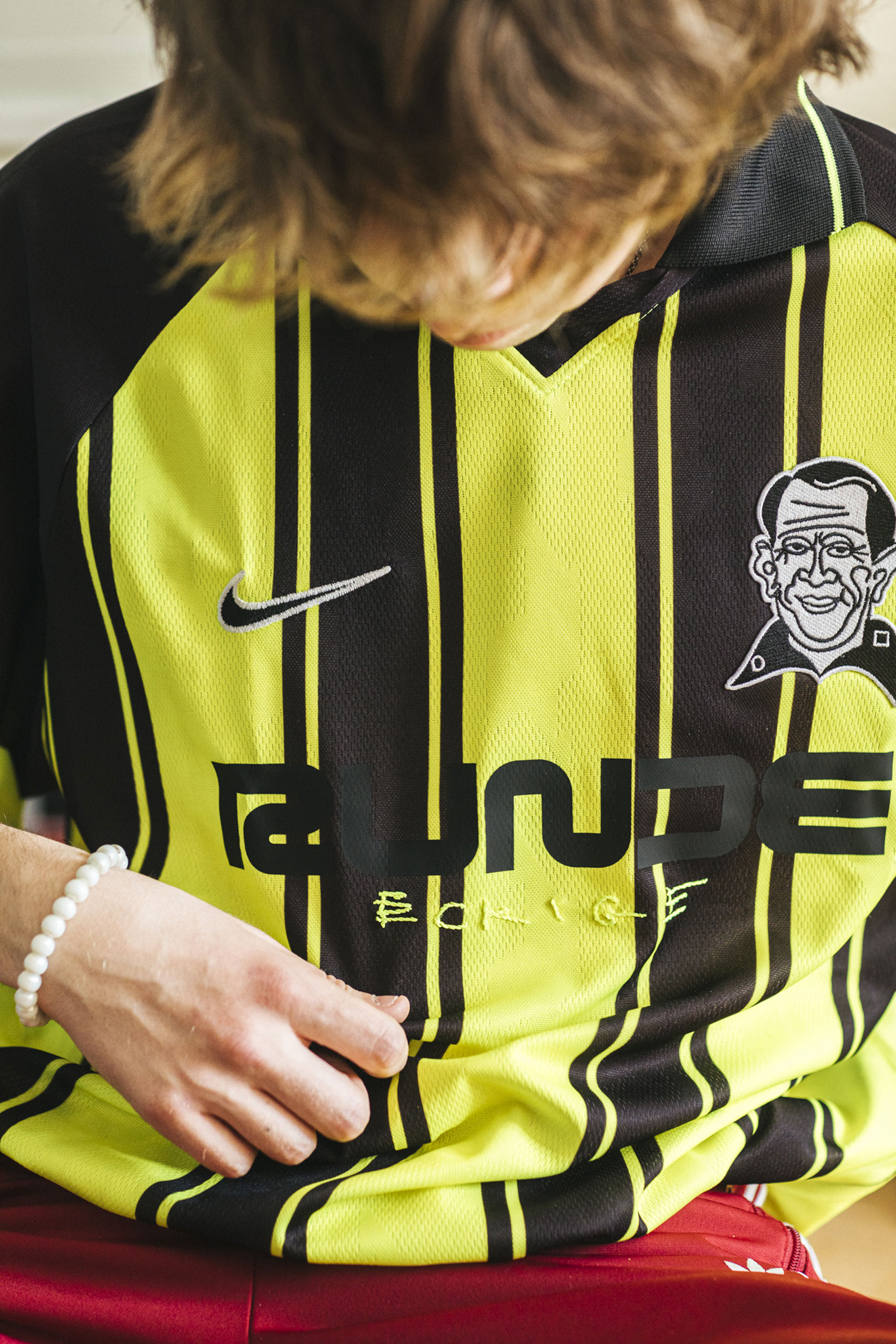 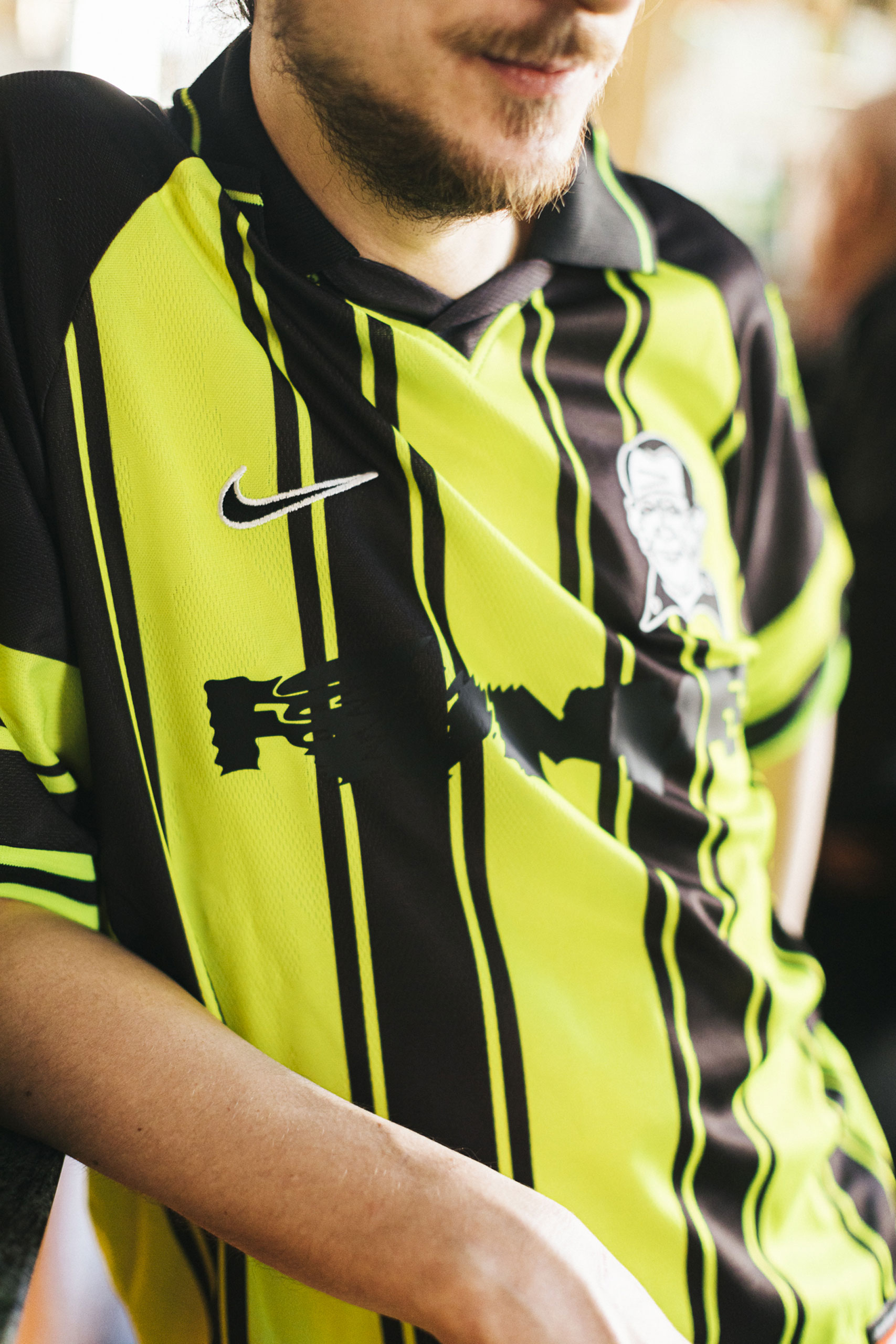 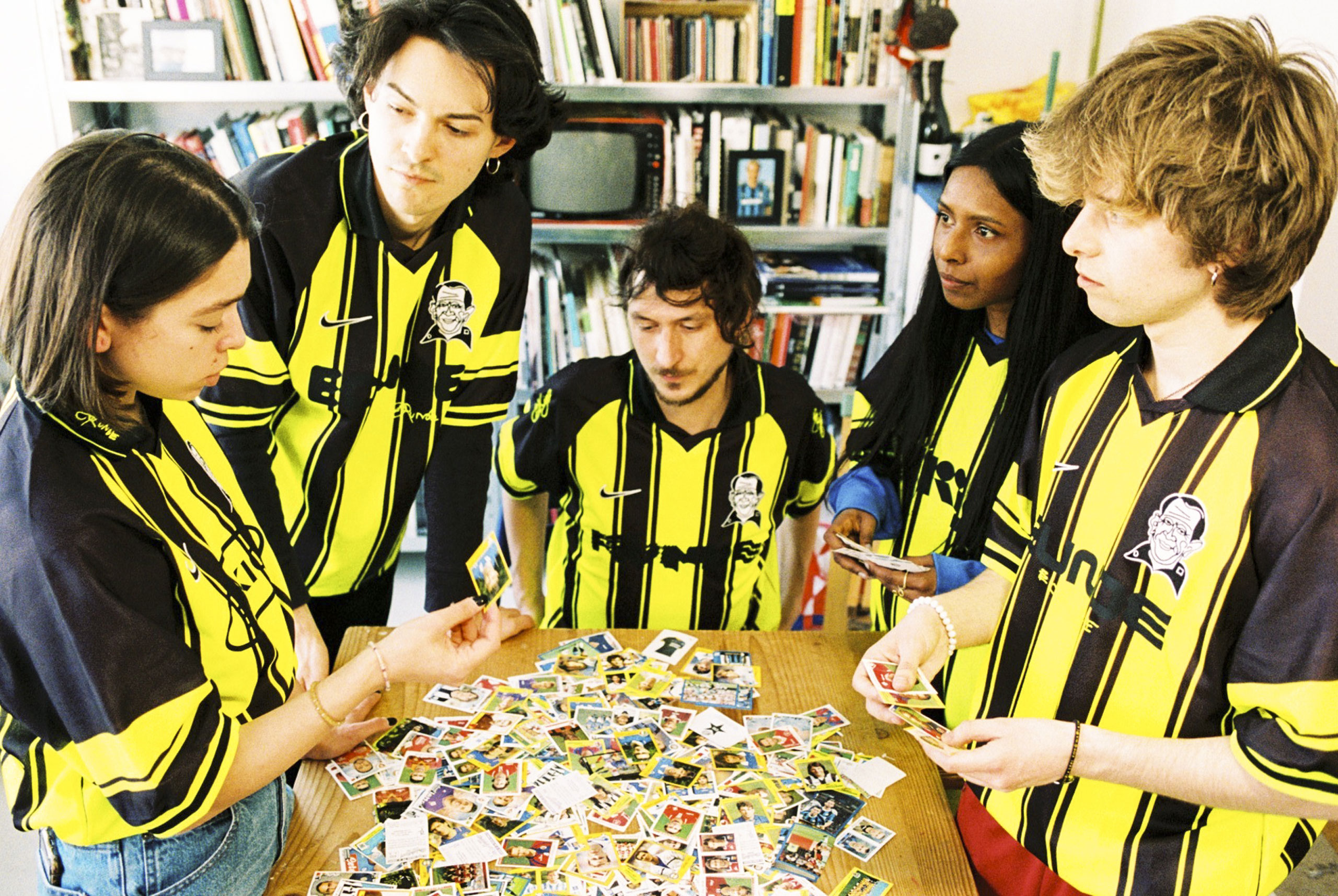