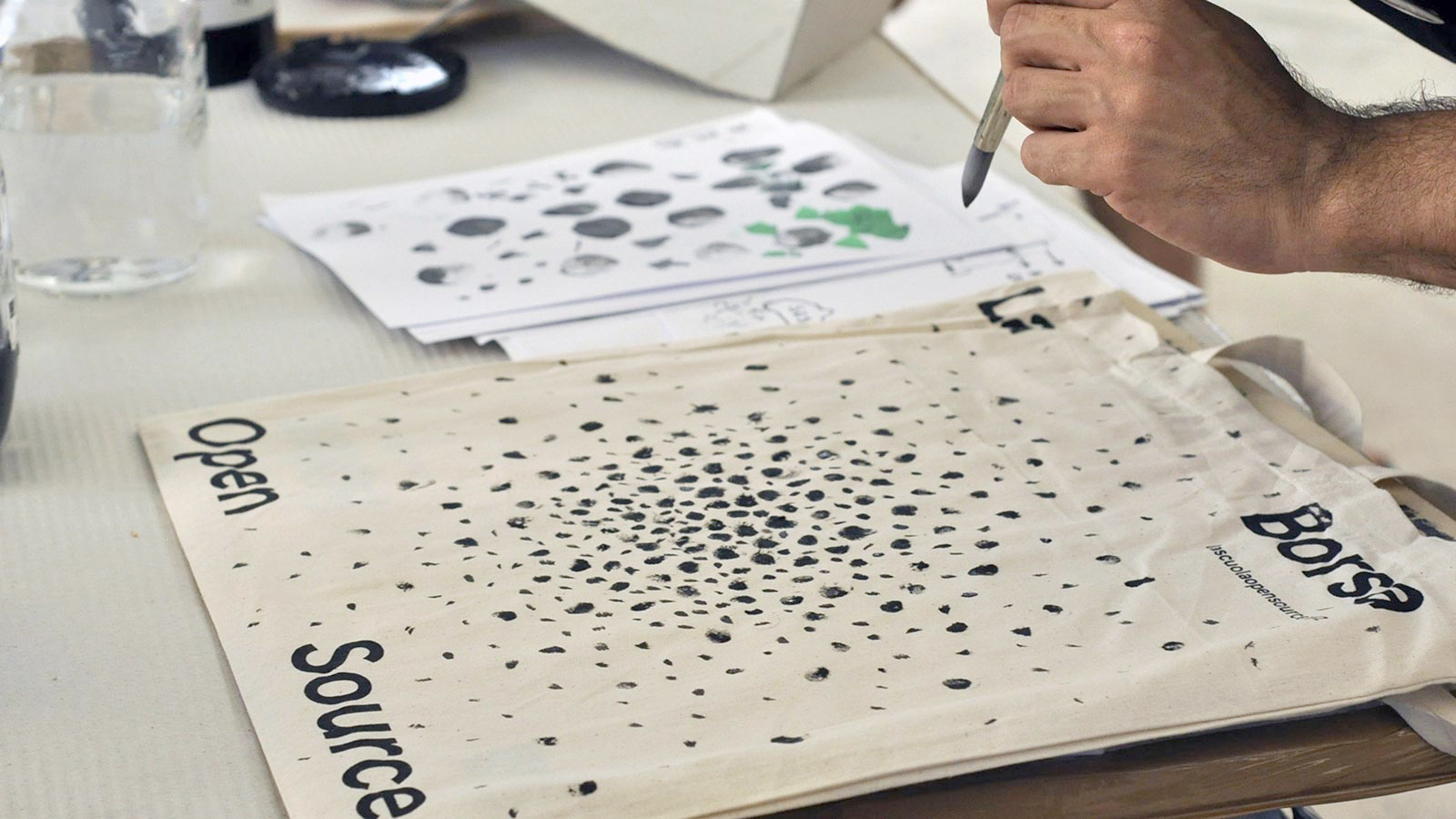 We were given the opportunity to participate as teachers in the X laboratory. Two intense weeks (from 18th to 30th July) of laboratory within XYZ, to design the identity of The Open Source School, an “educational Institute, center of artistic and technological research and consultancy of Industry, Commerce and Crafts (both digital and non-digital)”.

Visual Concept
The key element of the identity is the composition of the logo. The four words are distributed on the four corners of the medium defining a white area where crazy things can happen. The idea is that the school itself, represented by the logo, it’s a space where different people, experiences, ideas and projects can move freely. A place where the interaction in between all these elements contribute to generate meaning.

The words attached to the left and right side of the medium generate two visual axis where the rest of the contents can be placed, emphasising even more the white space.

We need to mention that the new identity was meant to question and replace the previous one. In order to make the community aware of the upcoming change and to test their reactions we have run a performance during the first week of workshop: the words “The Open Source Manifesto” where printed at the corners of an A4 paper and people were asked to freely draw a shape without covering the words. This performance gave away the identity to the people, making them able to do almost whatever they want with it. It was a first step in building a relation in between the new identity and the community that would have adopted it. At the same time worked as an inspiration for the possible shapes that could have been use to occupy the empty space. 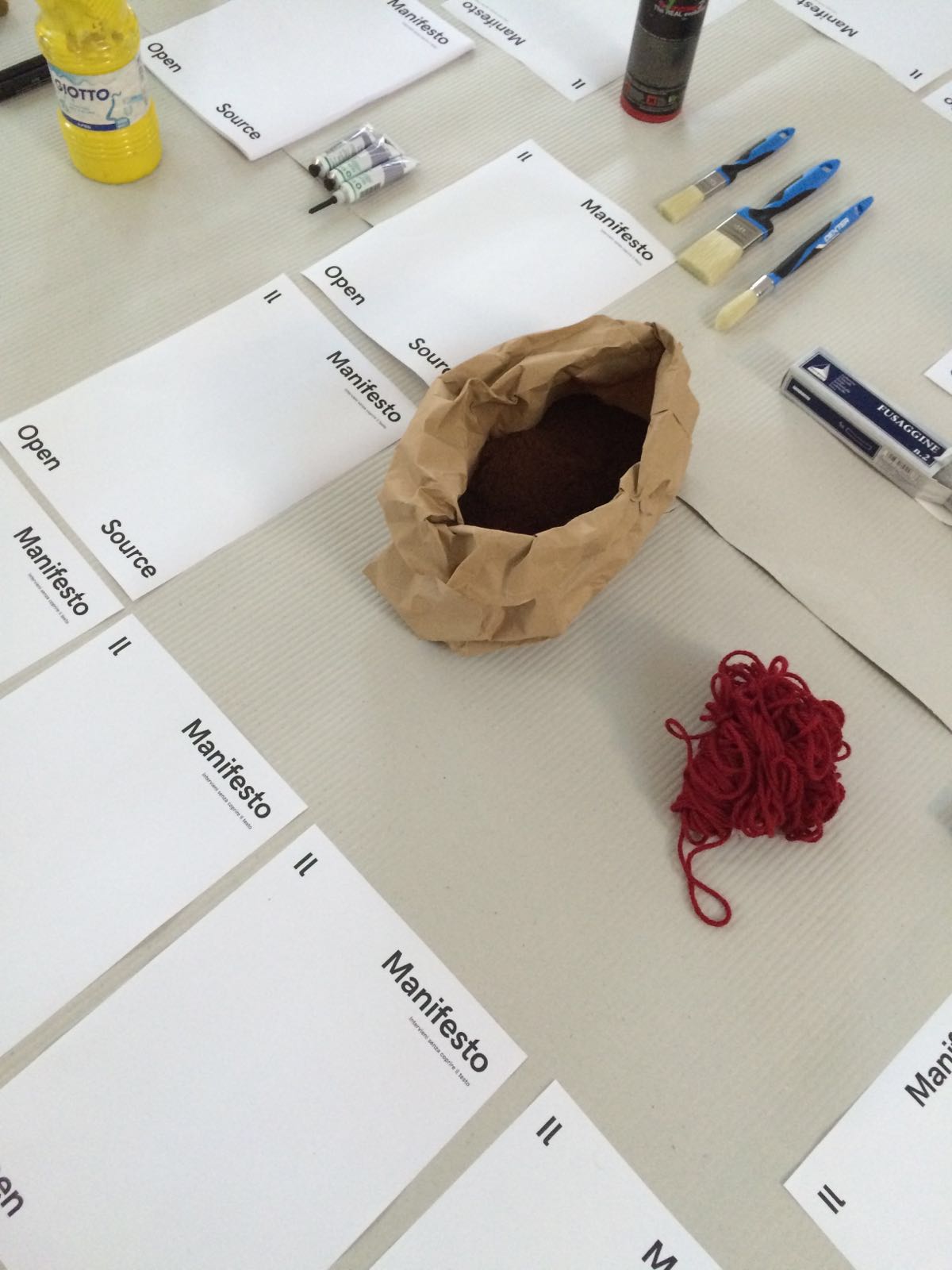 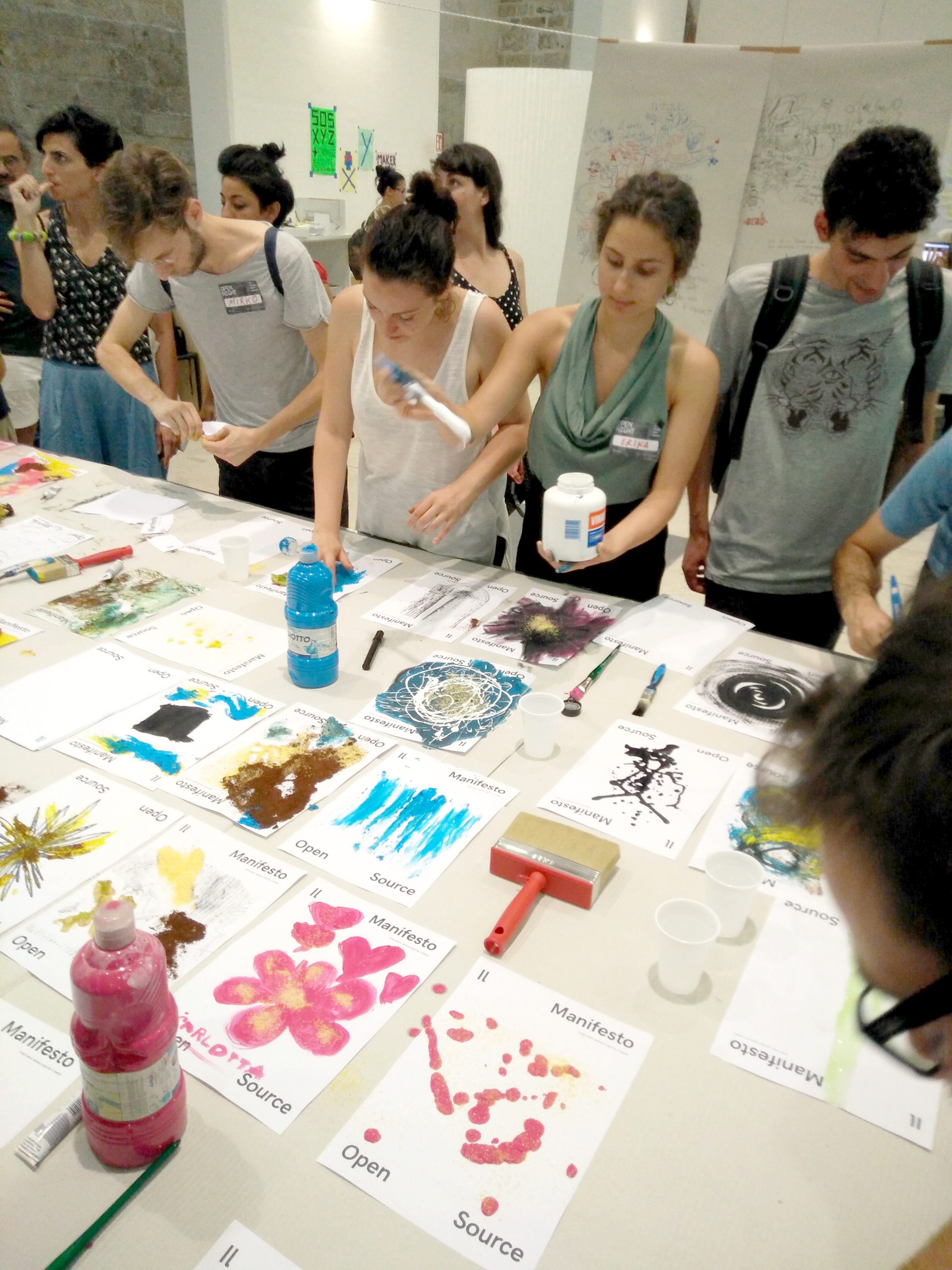 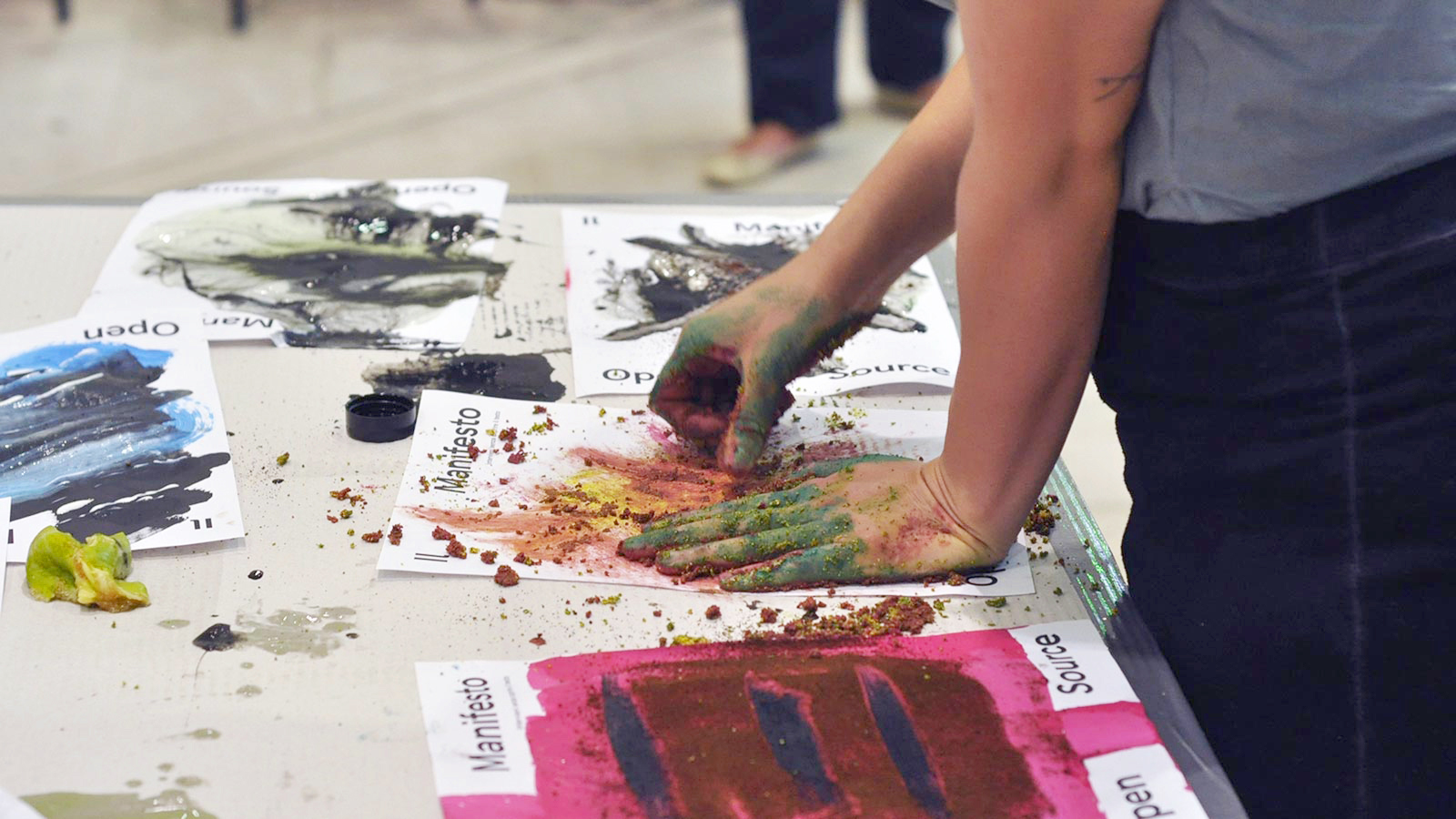 Other Key Visuals Elements
Since the use of typography is the main element of this identity we have decided to design a new font. Starting from the HK Grotesk, released as Open Source, we have developed a new typeface: Freak. This new font includes some new freaky glyphs that give a stronger personality to the whole identity. The new font will be soon released as Open Source, becoming a fun to use tool for the whole community. 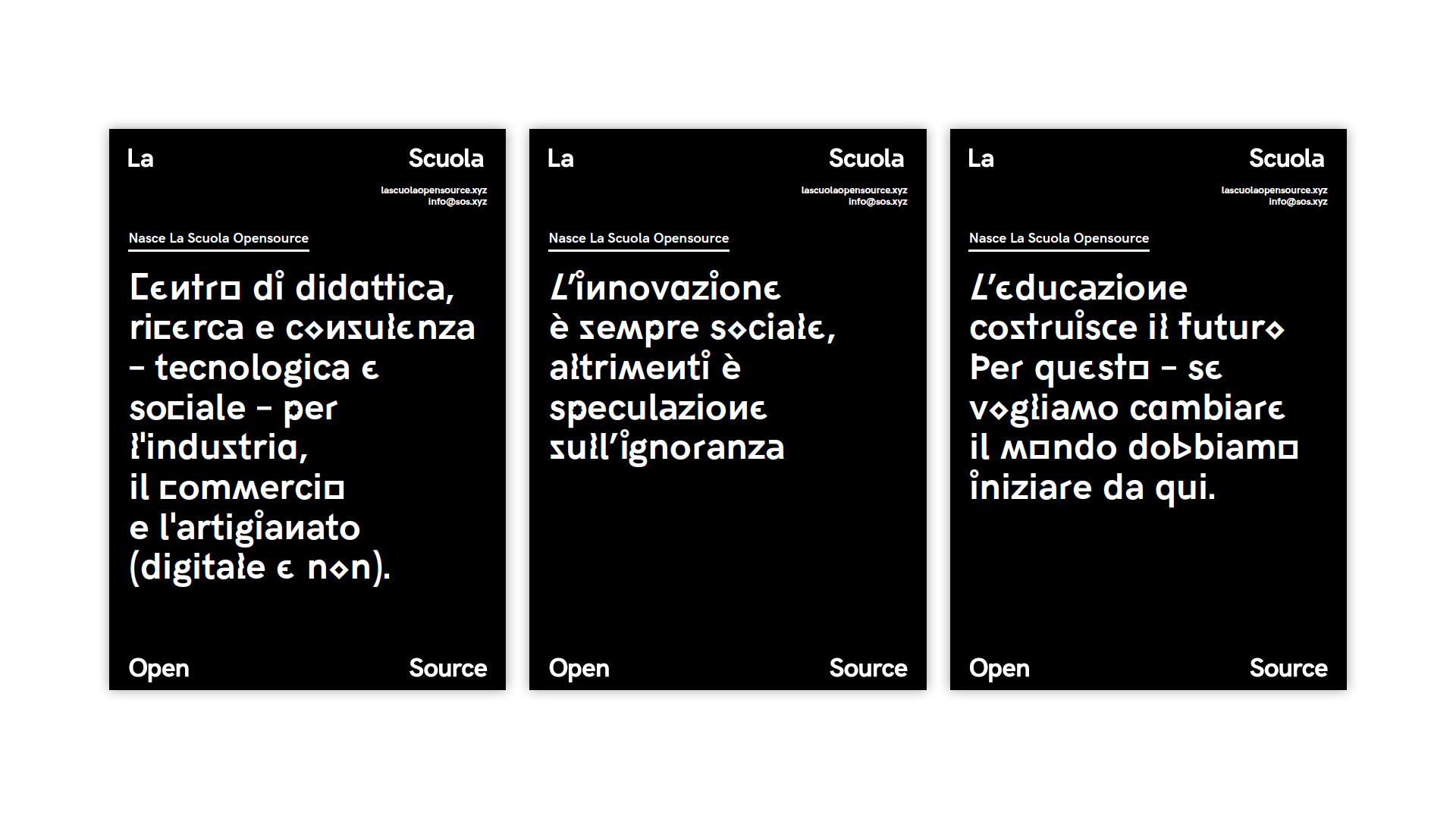 The colour palette features some very bright colours, inspired by the programming language and the hacker aesthetics. The idea is to replaced the ink within the yellow cartridge with a green flou one, which is also the reason why the other colours have no percentage of yellow in.

The last key element is the organic shape that would adapt to the space left by the typography. This represents the movement of the community acting within the school. It can be drawn by hands or automatically generated. This can be done with a ad-hoc Processing script that simulate the behaviour of a fluid interacting with the space occupied by typography.

Levels of use
This identity has been design in order to be used on three different levels:

A.Institutional communication
On the institutional material the identity only uses the typographic composition. With the four logo words attached to the corners and the typographical elements aligned to the axis corresponding to the two sides. The system is printed almost exclusively in black and white in order to be always easy and cheap to reproduce. 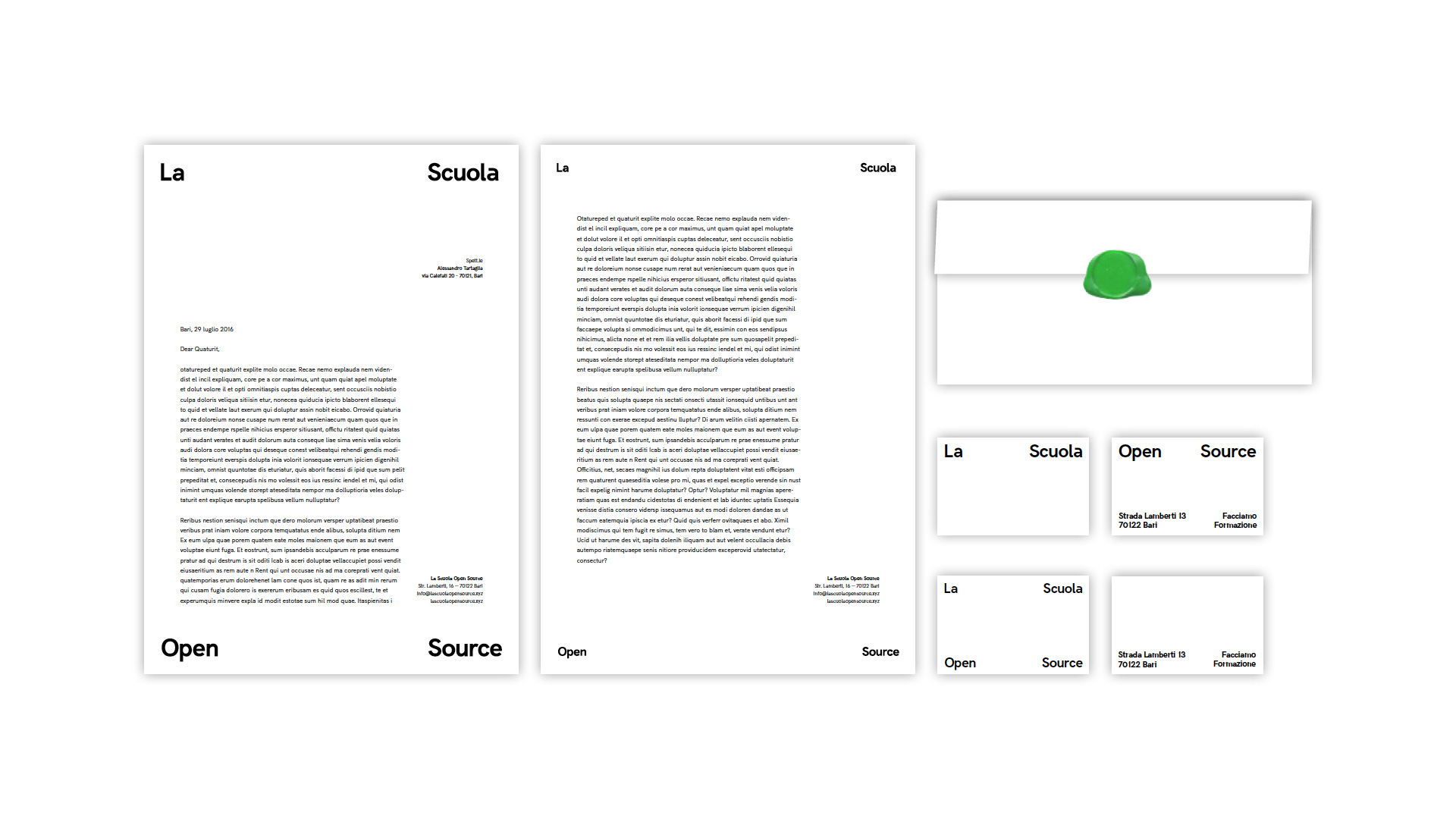 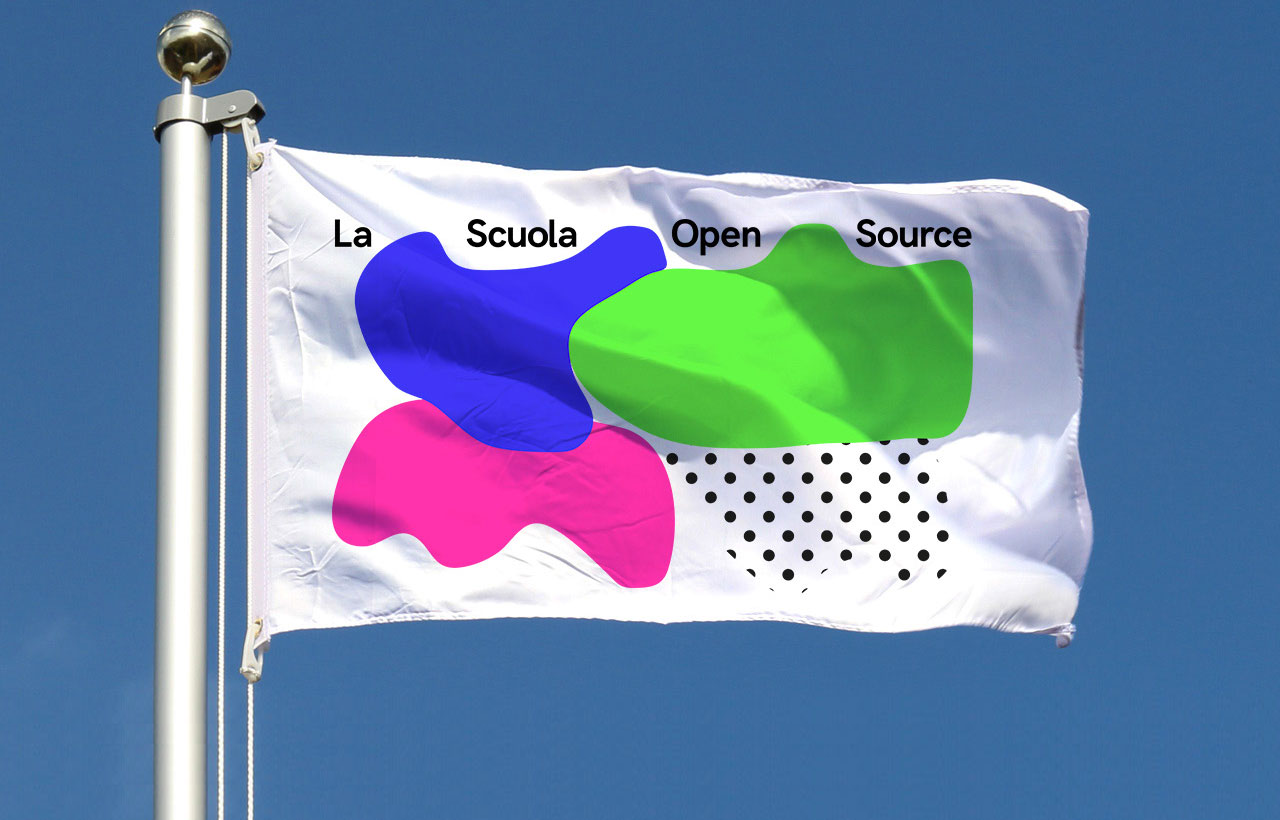 Based on the result of the performance we already described, we decided to leave room for the free interpretation of the community members. People are free to use the space defined by the typography as they wish, following the only rule to don’t cover the type. This approach have been tested again in a second performance where the participants were asked to fill the space on a shopper. The result is an immersive experience, where the community become user and producer getting involved in the definition of a living identity. 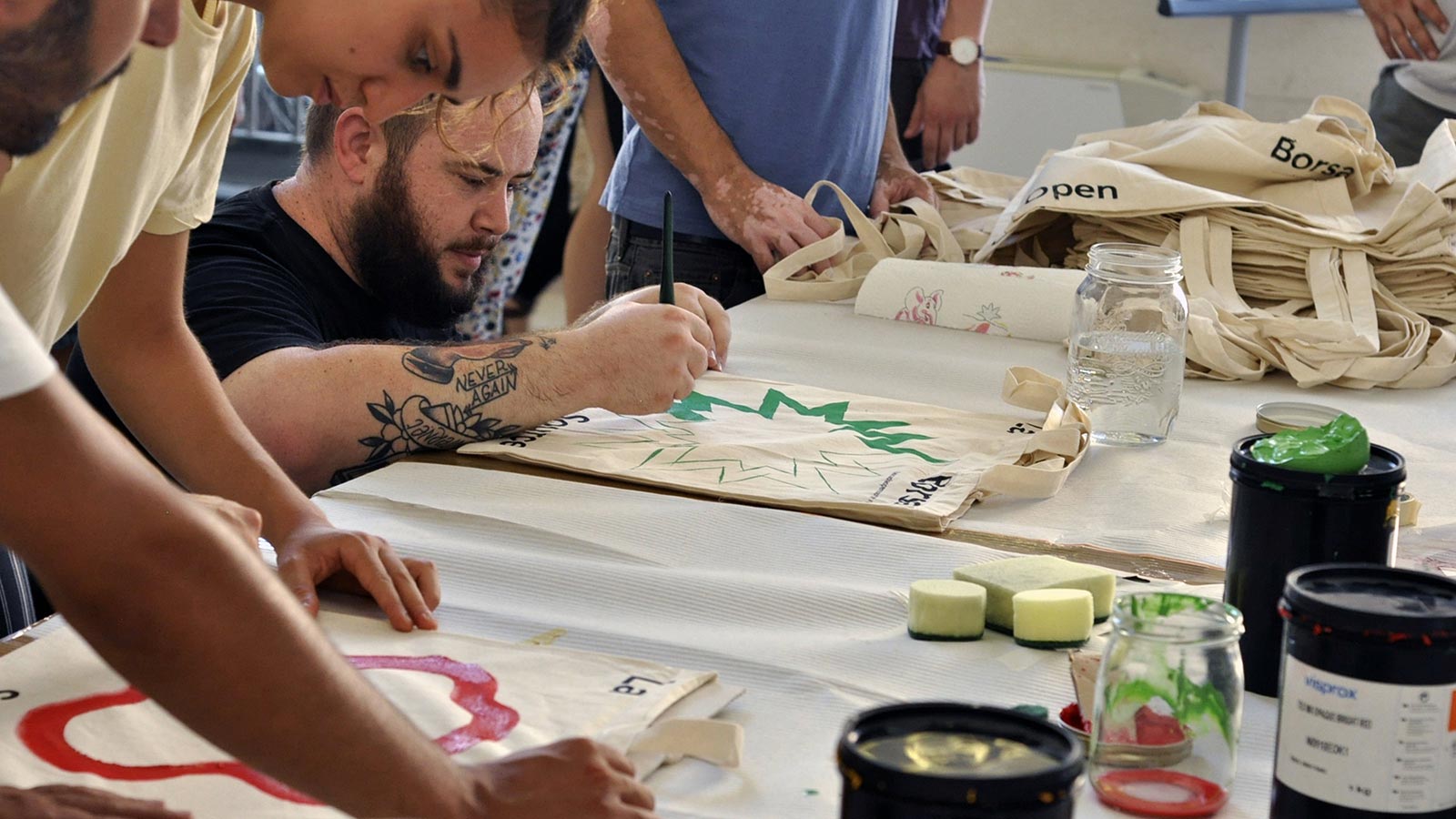 The creative process
During the first week the whole group worked together in order to define the guidelines that would have driven the project.

In a first place the students were asked to identify the keywords that express the school. Then they were asked to take those keywords on a more abstract level – in order not to describe the school, but to evocate it – putting together an imagery that would have driven the design process. At the end they were also asked to make a collective visual research to start visualising their ideas and communicate them to the whole group. 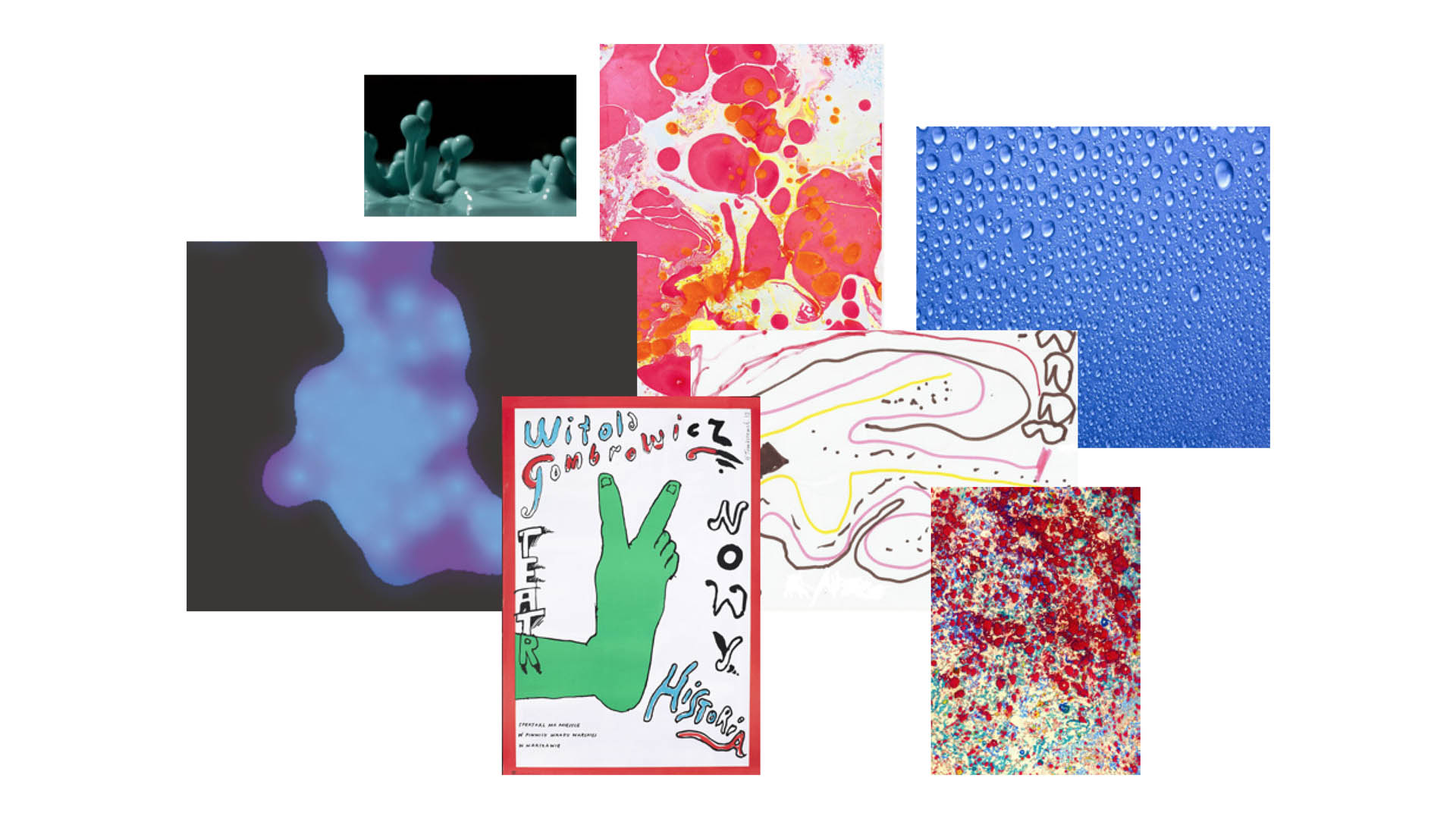 All this initial phases were partially based on the p2p design strategies we’ve been developing during the past years. In particular the students were asked to work individually, to collect their input anonymously and to discuss all the proposals with the group. Trying not to push their own work, but to react on the others.

The materials collected in the research were organised in 4 principal concepts: Fluidity, Open Work, Freak and Materials. Based on these 4 directions the students gathered in small groups and eventually started to draw. They were asked to visualise one of those concept and to present them to the group, after the discussion they gathered in different groups in a way that everyone would have developed somebody else’s work. 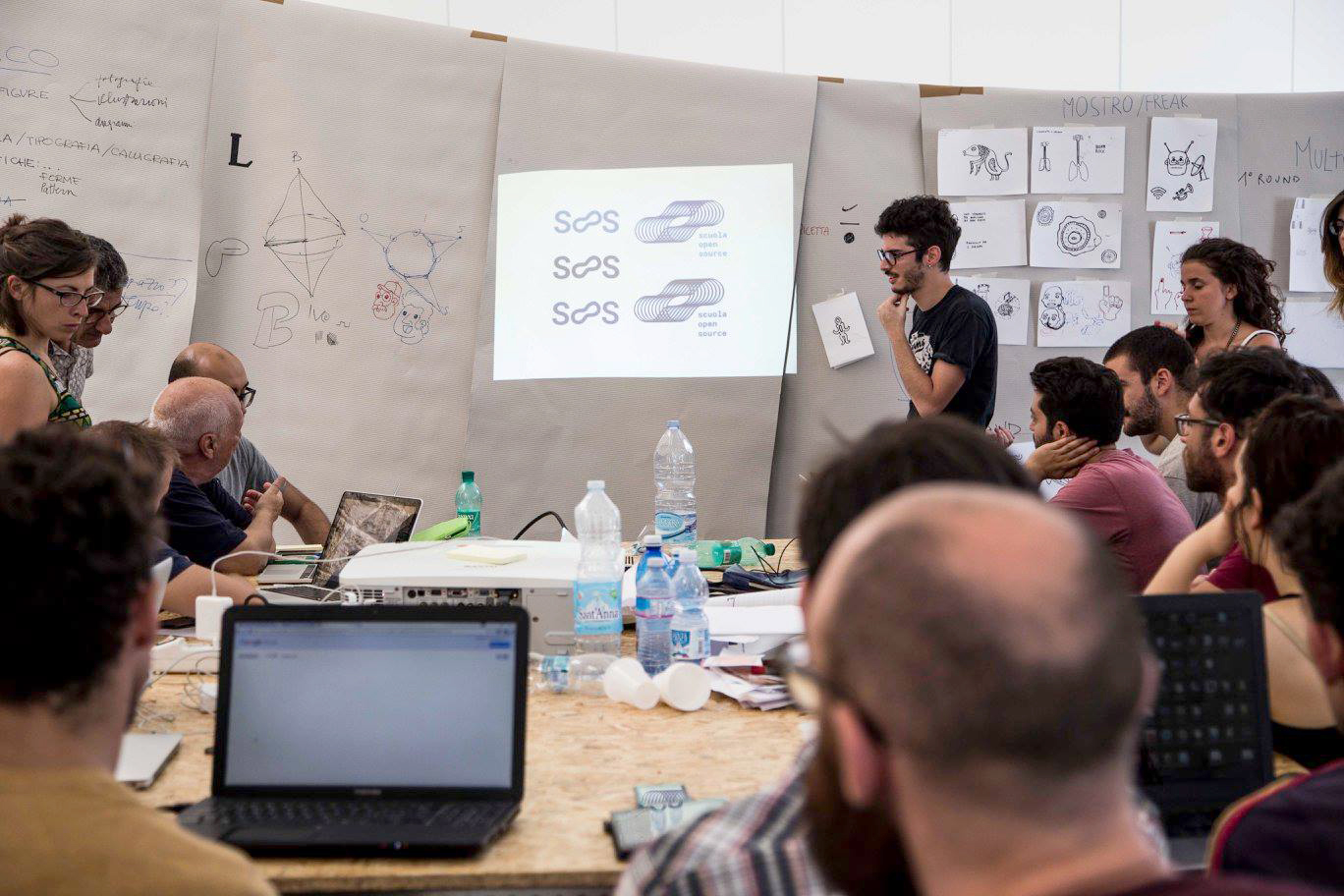 After this first process the students divided in three main groups, working like small design studios and corresponding to the three main output expected: the identity material, the website and the publishing. Due to the complexity of the project, the amount of people involved and the short time available most of the design was developed in parallel with a continuos exchange of proposals and solutions that would eventually converge to a single one saving room for discussion and personal interpretation.
The final result (available here) is a solid base for further development that demonstrates the effectiveness of the system proposed. It does still need some adjustments to be completed and actually used but on the other hand is meant from the beginning to be something that can be taken over by other designers and change during the time without losing its charm.